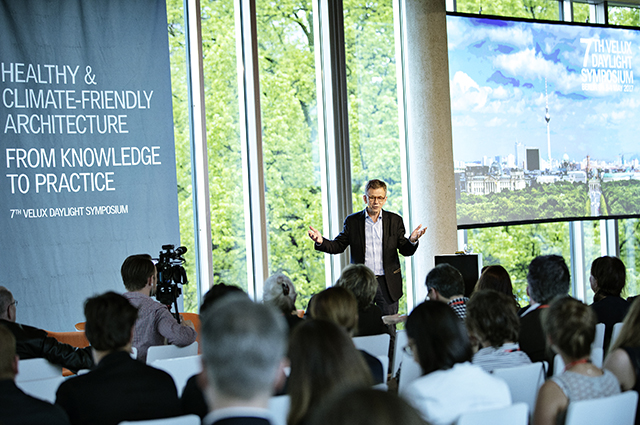 Holding a Master of Business Degree from Sup de Co Le Havre and Stanford University USA in 1976, Michel Langrand became in charge of the Building and Civil Engineering works Dpt. of Atlas Copco France before taking HIAB-Foco France’s Sales Management in 1984. In 1989, he was appointed as Commercial Manager of Somfy France and in 1992 joined the General Management of VELUX France which he has headed for nearly 25 years. Today he is the special advisor to the CEO of the VELUX Group and member of the Board of the VKR Employee Foundation.

John Mardaljevic (PhD, FSLL) is Professor of Building Daylight Modelling at the School of Civil & Building Engineering, Loughborough University. Mardaljevic pioneered what is now known as Climate-Based Daylight Modelling (CBDM). Founded on rigorous validation work, CBDM is now the basis for research and, increasingly, industry practice worldwide. Mardaljevic’s practice-based research and consultancy includes major projects such as the New York Times Building and The Hermitage (St. Petersburg). He currently serves as the ‘UK Principal Expert on Daylight’ for the European Committee for Standardisation CEN / TC 169 WG11, and on a number of International Commission on Illumination (CIE) technical committees.

Werner Osterhaus is an architect and Professor of Lighting Design Research at the Department of Engineering at Aarhus University in Denmark. His passion lies in applying design, technology and science to architectural (day)lighting to ensure well-being and pleasant experiences for building occupants and a sustainable built environment. Werner has been involved in daylighting research and design since he first started working with Lawrence Berkeley National Laboratory’s Windows and Daylighting research group in 1987. Since 1994, he has been a full-time academic in schools of architecture in the USA, New Zealand and Germany, and since 2009 in a school of engineering in Denmark. He focuses on lighting design, sustainable architecture and building environmental science. Werner has lead and contributed to numerous national and international research projects, published many scientific articles, and regularly serves as reviewer for research funding agencies and international journals.