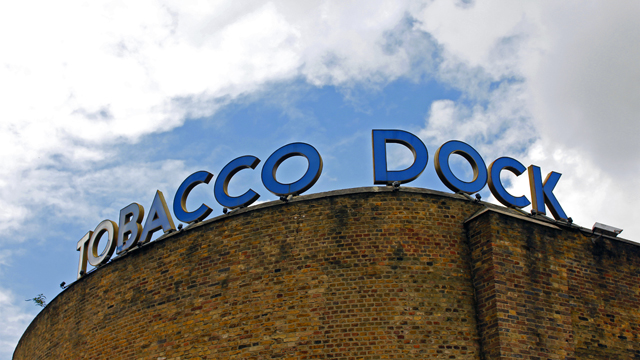 Tobacco Dock is a Grade 1 listed warehouse in east London. It was constructed in approximately 1811 in the Docklands area and it served primarily as a secure bonded warehouse for the receipt and storage of imported tobacco.

In 1990, the building was converted into a shopping centre at a development cost of £47 million. The intention was to create the “Covent Garden of the East End.” However, the scheme was unsuccessful, and it went into administration.

In 2003, English Heritage placed Tobacco Dock on the Buildings at Risk Register, with an English Heritage spokesman commenting in 2004: “We see Tobacco Dock as a future priority because it is too large and important a site to be left standing empty. It is one of the most important buildings in London and if brought back into use it would reinvigorate the whole area.”

Several ideas have been in play for the future of the building – And in 2012, the 16.000m2 space was relaunched as an event venue – being able to accommodate over 10.000 attendees. It has also been used for music videos and TV shows – and even as accommodation space for 2,500 soldiers deployed to guard the Olympic Games in London in 2012.