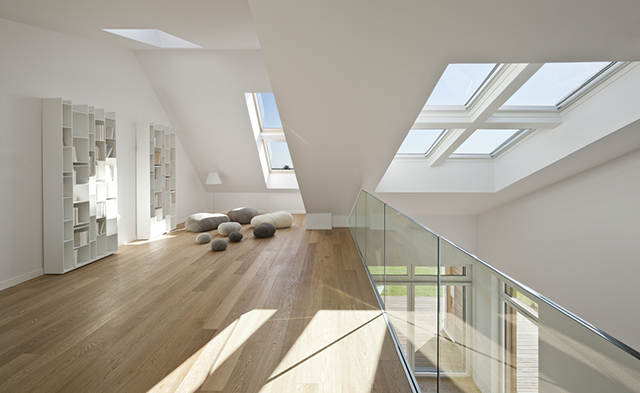 PLENTY OF DAYLIGHT WITHOUT OVERHEATING

Will high levels of daylight in a home automatically lead to overheating? Not necessarily. With the right preventive measures, we have demonstrated that it is possible to deliver high amount of daylight without having overheating problems, and that windows actually play a key role in keeping a comfortable indoor environment during summer time.

These statements are based on monitoring results from VELUX demonstration buildings, and research on human comfort and preferences in dwellings. Five single-family houses were constructed in the period 2009-2011 as a part of the Model Home 2020 project. Families lived in each house for one year or longer. A key design requirement to fulfil in the Model Homes was a daylight factor average of 5% in the main rooms of the house. The daylight performance were validated using daylight factor simulations, as shown in the example below from the French project Maison Air et Lumière in Paris.

The daylight performance of the house resulted in a significant reduction of energy consumption for electrical lighting in the house, with a consumption less than half the amount evaluated using the RT2012 (Thermal Regulation 2012) model in France, as shown in the illustration below.

To prevent overheating, the main measures were natural ventilation, overhangs and dynamic external solar shading. All building systems were automatically controlled, particularly regarding window openings and solar shading. The measured temperatures show that overheating have not occurred in any of the houses during the one-to-two year periods during which detailed measurements have been made. The result is exemplified in the data from Maison Air et Lumière, shown below, where only a few hours exceeded category 1, the strictest category defined in the indoor climate standard EN 15251. 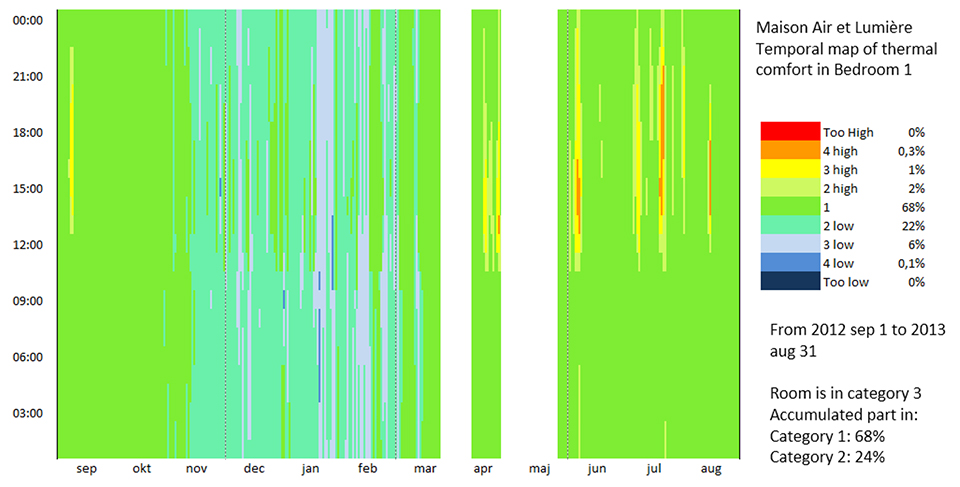 Thermal comfort in the living room and bedroom of Maison Air et Lumière. Each hour of the year is illustrated as a small square. The hours are presented so that hours of the same day are sorted from 00:00 to 24:00 (bottom to top), and from January to December (left to right). The hours with temperatures above category 2 are seen as yellow, orange or red colour. These hours occur in three episodes, each of 3-4 day duration (the wider the bar, the more days). They begin around 13:00 and in most cases, the temperature has dropped to category 1 or 2 again by 22:00. During the night from 24:00 to 6:00 there are practically no hours with temperatures above category 2. Data in the white parts of the graph are missing due to an error in the recording system.

The period of interest here is the summer from June to October. It is clear from the figures that overheating is very limited in both rooms. Bedroom 1 is a bit warmer than the Living room, but importantly, Bedroom 1 has cooled down to category 1 around bedtime (22:00 is estimated as bedtime) on almost all warm summer days, and the temperature stays within category 1 during the night. Avoiding overheating at night is important for sleep quality. When asked in questionnaires, the Model Home 2020 families reported that their sleep quality was as good or better than in their former home.

The figures also show that during winter, the temperatures are often below category 1, most often in category 2, which is between 20°C and 21°C. The temperature is controlled by the family via standard heating system thermostats and the results seen simply reflect the preferred temperature of the family. This could indicate that the lower temperature limits of EN 15251 could be lowered for the winter situation.

More information on the performance of Maison Air et Lumière was presented in REHVA Journal in June 2014.

Visit our demonstration buildings page for more information on the Model Home 2020 projects from the VELUX Group.