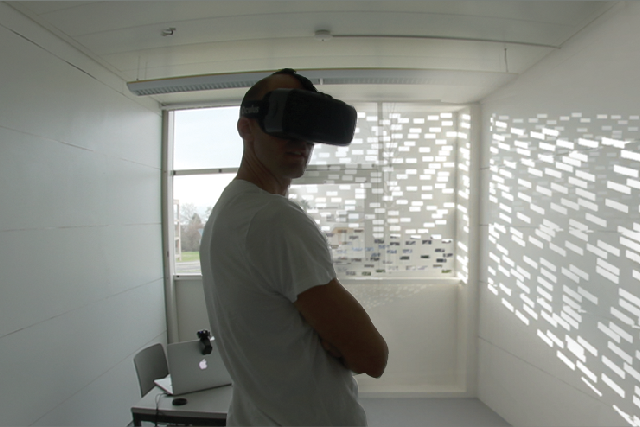 The profound impact of daylight on occupants is broadly recognized in the fields of architecture and lighting. In particular, the façade and its interplay with light is a central design element, while the diversity of daylight in space is widely acknowledged as a source of interest and stimulation that enriches our spatial experience. However, little is known about how the façade geometry and the resulting daylight patterns affect occupants. Moreover, we have limited knowledge on the impact of space function and of regional differences on human perception.

This thesis investigates the effect of façade and daylight patterns on human responses, while simultaneously examining the impact of space function and regional differences on these responses. The literature suggests two important challenges in current experimental methods in lighting research that might be contributing to the aforementioned knowledge gaps: the changing daylight conditions, which create an unstable variable, and the use of rating scales as the sole method of data collection. To address these challenges, this work introduces two main methodological contributions: the use of immersive virtual reality (VR) as an experimental tool, and the collection of physiological data as a complementary measure to rating scales. Specifically, a novel experimental method that combines VR with physically-based scenes was developed and tested against real environments in experiments that examined its adequacy regarding the perception, presence, and physical symptoms of participants.

Following the positive findings for the adequacy of this method, VR was employed in a series of experimental studies that investigated human responses to façade and daylight patterns, and laid the foundation for a wider study that was replicated in Switzerland and Greece. In all studies, each participant was immersed in a daylit interior space with varying façade configurations of a constant aperture ratio, and the impact of façade geometry, sky type, and spatial context on participant responses was examined in different experimental designs.

The outcomes of this work revealed that the façade and daylight patterns impacted both the subjective and physiological responses of participants. In particular, façade and daylight patterns consistently influenced the spatial experience, such as how pleasant, interesting, exciting, calming, and complex the space was perceived. The façade geometry also impacted spatial attributes that are traditionally considered objective, such as the perceived brightness, spaciousness, and satisfaction with the amount of view in the space. Moreover, the presented façade and daylight patterns significantly affected the participants‘ heart rate, demonstrating in a VR setting that façade elements and their interaction with light can have quantifiable effects on occupants.

The perceptual effects of façade geometry were shown to be robust to changes in the sky type, as well as the function, type, and window size of the space. In addition, no differences were found between the responses of participants in Switzerland and Greece, revealing the generalizability of these design-driven perceptual effects across latitudes in Europe. The findings of this thesis demonstrate the importance of façade design as a powerful driver of the spatial experience, outlining new directions in the design of buildings that are not only comfortable and energy efficient, but also delightful for their occupants.

The Ph.D. thesis can be accessed here