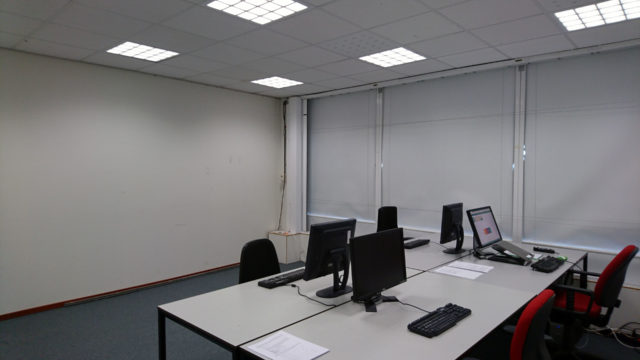 Office buildings no longer just serve to provide occupants shelter to the outside world; they are transforming into autonomous objects because of automation and information technology. Smart luminaires, for example, are equipped with several sensors that collect data that can be used to optimize the building operation. Simultaneously, the occupation of these buildings is changing because of flexible working styles, causing large differences in individual occupancy patterns. The high-density network of occupancy sensors as provided by the smart luminaires makes it possible to tailor lighting to these individual patterns.

Such a strategy is expected to diminish offices’ energy consumption for lighting but its main challenge resides in maintaining office workers’ comfort, which is an important aspect because of the effect of lighting on their health and well-being. Therefore, the lighting conditions should provide a comfortable work environment and be considered as pleasant by the occupants. As a result, this research focusses on developing an automatic occupancy-based lighting control strategy – local lighting control – that accomplishes both aims.

A literature review (Chapter 1) shows that the main research gap related to this strategy regards its testing in bullpen offices and involving users in the post-occupancy evaluation. Therefore, this research develops a strategy that is suitable for this type of offices and approved comfortable by the users. Based on the results, it is furthermore suggested to investigate the potential of a dimming approach. Moreover, the energy saving potential requires further attention from research as results differed largely across studies, possibly due to differences in individual occupancy patterns.

This influence is investigated with simulations (Chapter 2). Based on the results, it is concluded that local lighting control brings energy savings >25% compared to central control; this finding holds across office cases that differ in function type distribution (1), meaning the mixture of job functions, and office policy (2), that is, the flexibility granted by the company regarding employees’ working times. Thus, local lighting control is relevant to apply in any office.

Following these positive findings, both a switching-off and dimming approach are tested with users (Chapter 3). In the real office (N = 9), switching-off seems to cause (initial) dissatisfaction to the occupants regarding the lighting distribution. The dimming approach distinguishes between a task, surrounding, and background area; a controlled study shows that almost all combinations of output levels in these areas are positively evaluated by the majority of the participants (≥ 70% of N= 25). Therefore, dimming is recommended to use in bullpen offices instead of switching-off luminaires in response to individual occupancy changes. Moreover, this study shows that applying a low dimming level in the background area achieves both energy savings (55-65% compared to central lighting control) and sufficient comfort levels (favorable evaluation by ≥ 70%).The evaluations show large individual differences, indicating a need to study preferences for luminance distributions in more detail.

Chapter 4 reports two studies that investigate these preferences; the first study focusses on revealing the influence of time-of-day and subjective alertness. The results from this controlled, one-day study with a single occupancy scenario show that the majority of the participants prefers a medium surrounding luminance (35-65 cd/m2) and a lower value (20-50 cd/m2) in the background area, anytime during the day (Ntotal = 30). As luminance ratio between the areas, preferences are divided; mostly, a uniform ratio, the type “task & surrounding > background”, or the type “task > surrounding > background” were preferred. A subset shows varying preferences over the day due to subjective alertness; as individual differences are too large to recommend one generic dynamic scenario, local lighting control should consider this aspect in real-time. The second study occurred in a large office (88 m2); it reveals that in the large office studied users prefer lower luminances, especially in the background area (Ntotal = 41). Participants show again individual variation, but they mainly prefer a uniform luminance ratio or the type “task & surrounding > background”. Motivations for these ratios as obtained in interviews suggest that occupants use the surrounding level to guarantee their visual comfort, while the background level serves to create a certain atmosphere and feeling.

After these semi-controlled studies, the research continues in the real office environment (Chapter 5). The results of a first study in a bullpen office show that the lighting changes due to local lighting control distract some occupants (Ntotal = 9). Repeating this study in a cubicle office reveals that the acceptability of these distractions is much lower here; however, the job function and the amount of interaction seem to cause this difference, not the office lay-out.

In summary, this thesis shows that local lighting control is feasible to achieve simultaneously energy reductions and a comfortable work environment in bullpen offices. A dimming approach that distinguishes between three control zones (task, surrounding, and background) and that groups luminaires flexibly on the real-time occupancy minimizes the lighting use in the unoccupied part of the space while the luminance distribution can be tailored to users’ preferences. These include a low background luminance and non-uniform ratios and depend on users’ subjective alertness at the moment. By tailoring the lighting to these preferences, local lighting control positively benefits office workers’ well-being. The practical guidelines from Chapter 6 open the way for applying the strategy in the smart, multi-occupant office and improve its sustainability regarding its energy use for lighting.

Ph.D. thesis can be accessed here
Other publications by Christel de Bakker here