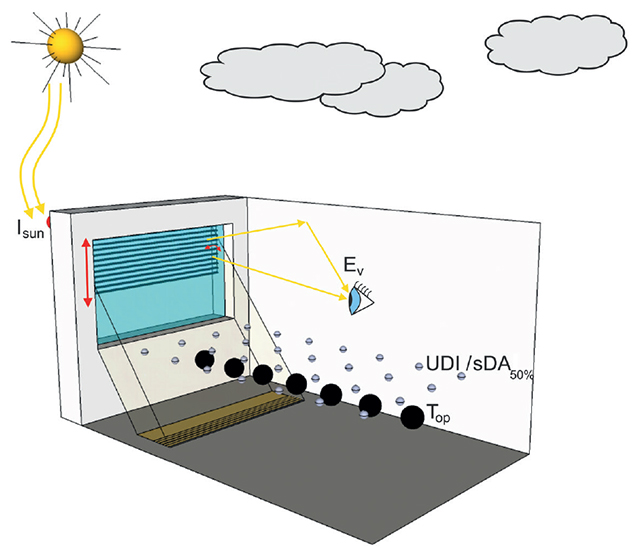 The objective of this thesis was to facilitate an integrated building design process applicable to office buildings in Nordic climate with respect to thermal comfort, daylighting and energy use. The thesis is divided into three main parts.

Part I contains a literature review carried out to investigate if the present thermal comfort and daylight design practices constitute any obstacle for conducting an integrated design. Based on findings in the literature it was suggested that modelling of mean radiant temperature (MRT) should be improved by considering the location in the room, accounting for both long-wave and short-wave radiation. With respect to daylight design it was suggested that static daylight calculations should be replaced by dynamic ones and that climate-based measures should be used in the evaluation of daylight supply and glare. Examples of measures for daylight supply are given in the literature (e.g. UDI and DA). Candidates for glare might be horizontal or vertical illuminance. Additionally, it was investigated how solar shading control should be modelled, since the fenestration system and its control is a crucial link between the thermal and daylighting performance. It was suggested that shading control strategies preferably should be multivariable and incorporate variables related to interior conditions. It was proposed that the tilt angle should be considered as a control variable for shading with blinds. Furthermore, it was found that more knowledge is needed regarding user acceptance of automatic solar shading controls.

Part II describes verification of improved models of MRT and daylighting implemented into the simulation tool IDA ICE, which is one of the steps to make the integrated design method practically applicable for building designers. The new MRT model takes short-wave radiation hitting the occupant into account. The new daylight feature utilises the Radiance engine and the climate-based three-phase method, which arranges for daylight calculations to be conducted based on the same underlying boundary conditions as used in thermal comfort and energy calculations. Further, Part II describes the results from an occupant survey carried out to investigate occupants preferences with respect to use of automatically controlled venetian blinds and their sensation of glare in an office work environment. The results from the occupant survey indicated that views to the outside were an important factor for the occupants and it confirmed that the tilt angle should be incorporated as a control variable in the shading strategy. The results further indicated that there was a statistically significant correlation between both vertical eye illuminance and horizontal illuminance at the desk and the occupants’ perception of glare. Based on this study, threshold of 1700 lux vertical eye illuminance at the occupant position and 1900-2100 lux horizontal at the desk was found to be reasonable for avoiding excess glare perceptions in perimeter zones. Part II is ended with a proposal for a solar shading strategy suitable for office buildings in cold climates. The proposed strategy is based on a modified version of a control algorithm developed within the Norwegian R&D project “Glazed facades keeping what we promise”. The strategy is improved with findings from the literature and results from the occupant survey by utilising tilt angle as a control variable as well as applying vertical illuminance of 1700 lux as activation criterion. Full-scale measurements during both winter and summer conditions along with annual simulations verified high energy, thermal comfort and visual performance; resulting in better performance than with the use of a conventional strategy where the shading is activated according to external irradiance with closed slats in activated position.

Part III comprises an overall conclusion and suggestions for future work. It is indicated that the proposed integrated design might have implications on the traditional area of responsibility among design disciplines within a building design.

The thesis can be downloaded at http://vbn.aau.dk/files/240986648/PHD_Line_Roeseth_Karlsen_E_pdf.pdf