by Francesca Borra and Laura Cane, Politecnico di Torino, School of Architecture, Ms in Architecture Construction and City, Italy. The master thesis is a collaboration with Norwegian University of Science and Technology (NTNU).

Is it possible, through a careful natural lighting design, to safeguard the same accessibility both for normal sight and visually impaired elderly people in daily home tasks performance (cooking, reading, take medicines, watching tv, etc.)? This is the question that inspired us to carry out a series of full-scale experiments, both with daylight end electrical light, which are presented in the Master Thesis entitled: Through Their Eyes. The thesis is the result of cooperation between POLITO and NTNU. It is available at NTNUs Light & Colour Group. We have found that it is not enough simply to provide the appropriate illumination levels, but direct and reflected glare must be controlled and patterns of contrast must be appropriate, because dissatisfaction arises ‘as much from the permanent exclusion of sunlight as from its excess’ [Boyce, Human Factors in Lighting, 2014].

In 1974, the American gerontologist Bernice Neugarten coined the term Young Old to describe a theory of differentiated old age.  The Third Age refers both to a historical moment and a phase of life. As a historical moment, it is characterized by the coincidence of the demographics extended longevity and the domination of retirement as an institution. As a phase of life, the category Third Age distinguishes between at least two different types of older persons that emerged in the post-war period: the traditional notion of “old-age” bifurcated into the ailing and dependent Old-Old (Fourth-Age) and a new and rapidly expanding population of healthy and independent Young-Old (Third Age). 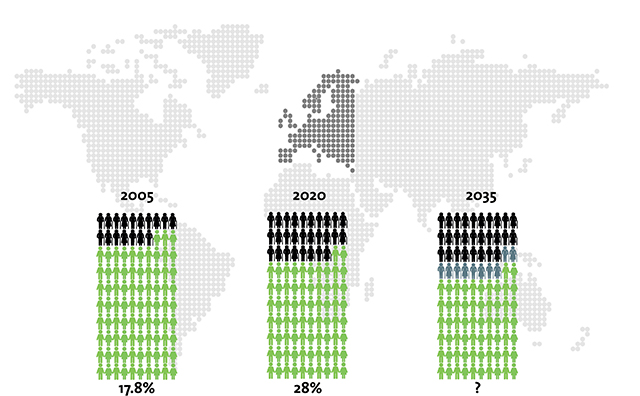 “The design of every environment, private and public, is affected by the aging population.” [Giovanna Borasi e Mirko Zardini, Imperfect Health, CCA Montreal, 2012]. At present, 17.4% of all Europeans are aged 65 and older. In 2020, the share of those over age 65 will rise to 28%.

It is known that as people age, a number of changes in the eye occur. With increasing years, the ability to focus close up is diminished; the amount of light reaching the retina is reduced and more scattered. These changes start in early adulthood and increase in form and magnitude with increasing age. The consequences of these changes with age for the capabilities of the visual system are many and varied: reduced sensitivity to light, reduced visual acuity, reduced contrast sensitivity, reduced color discrimination and greater sensitivity to glare. Vision loss in old age can be defined as a state that falls between normal vision and blindness. Globally, the five most common causes of vision loss are: cataracts, macular degeneration, glaucoma, diabetic retinopathy and refractive errors.

It derives a pressing need to identify the prevalence and incidence of various age-related vision impairments in populations, the mechanisms underlying these impairments, and how they impact on older adults performance of everyday visual tasks. In general, the willingness to leave familiar surroundings declines significantly in old age and, as a consequence, while older people spend more time in their homes with increasing age and health limitations, the age appropriateness (location, furnishing) of the living situation and age-appropriate design of the residential environment become more and more unsuitable in maintaining independence and quality of life. From the designer’s point of view, a quality lighting environment should be planned to optimize the person-in-environment system; understanding the effects of illumination on people can assist him/her in fulfilling the purpose of the environment itself.

Most of technicians who now control our luminous environments have reduced the criteria for illumination to simple numbers, which are basically unrelated to vision, perception, comfort, or pleasure.  Illumination levels should be a matter of design intent and budget availability and priorities, not merely a response to unjustifiable and often misconceived legal and programmatic requirements. Once minimal levels of illumination have been achieved, additional light is generally not the most effective means of increasing visibility and visual comfort. Absolute luminance levels do have a relationship to sensations of glare and distraction, but it is the patters of light sources and the nature of their relationship to other elements in the visual field which largely determine the overall quality of the luminous environment.

In order to find out how interior daylighting/lighting preferences are correlated with specific abilities of the elderly visual system, subjects with visual impairments and subjects with normal vision(after cataract surgery) were invited to take part in the research study. The visually impaired participants were chosen from the two following diagnosis groups: Macular Degeneration and Cataract. All participants were aged between 75 and 80 years and each of them had a full ophthalmological evaluation where their diagnosis have been confirmed by the optometrist Klaus A. Sjøhaug.

The test had to be done twice by the subjects: both in the Kitchen and in the Living Room, equipped with two different sun shading devices. The main purpose was primarily to evaluate the presence or absence of direct sunlight effects on the task performance (e.g. sunny and overcast skies). Participants were free to choose their most comfortable sitting place and two/three trials were conducted to help them to become familiar with the visual task. The test then started in the position that the subjects choose as the most suitable for them. Five sheets were presented one by one in the following order – from the easiest to the most difficult to read. Each subject performance was evaluated in terms of speed and accuracy, separately for the two light conditions (sunny and overcast); the reading time was registered for each sheet of words.

The questionnaire, filled out at the end of experiment, constituted another evaluation element, in particular to understand the subjects’ real needs and preferences.

Special care was paid to the time variable in order to get comparable results: illuminance and luminance values both of the room and of the paper sheet were checked before the start. The experimental session was planned so that all the participants could perform the test in the same time range (in June, from 4:00 to 4:30 pm).

Luminance was almost homogeneous. The most even light distribution was in Overcast Conditions (1 and 2), the reverse tendency was observed in Clear Sky Conditions (3 and 4), namely very large luminance differences in both rooms. In the living room the highest values are found in close proximity to the window, 1400 to 2600 cd/m2; as you move away from the window the values decrease uniformly to reach level of around 100 cd/m2 in places where daylight is obstructed. In the kitchen, the uneven distribution of luminances reveals the characteristics of both the light shelf and blinds. Their presence causes luminance variations between each slats, thanks to their reflection properties and sharp shadows on the work surface. 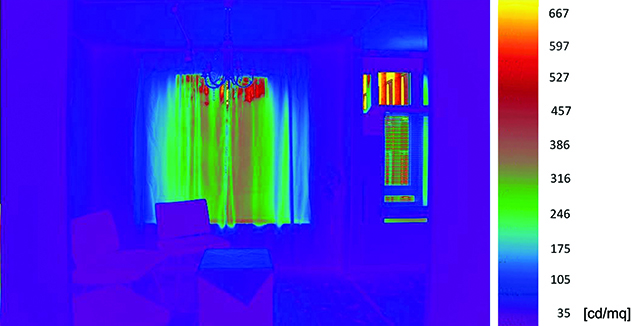 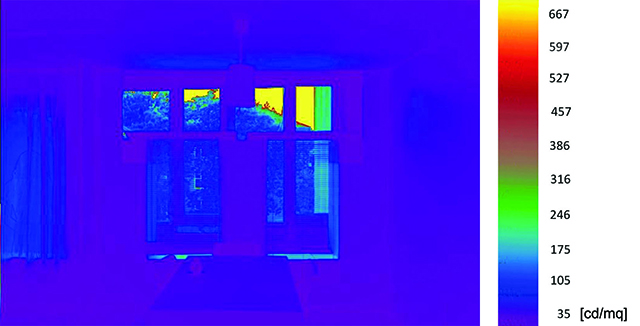 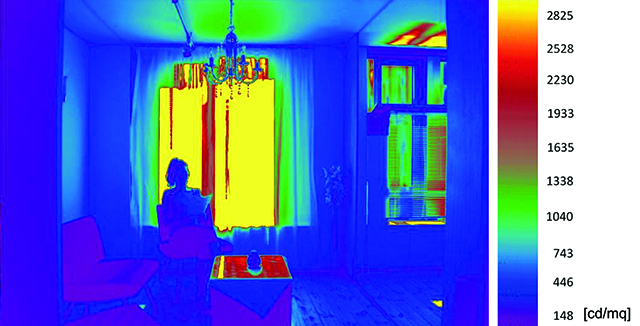 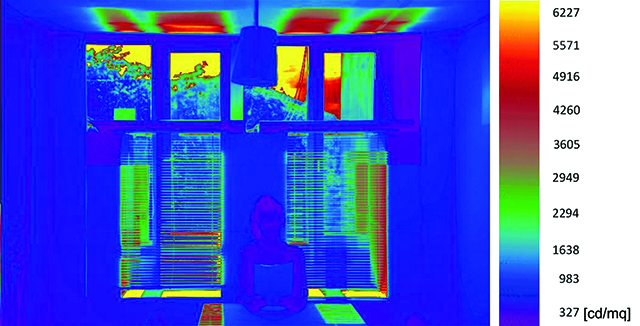 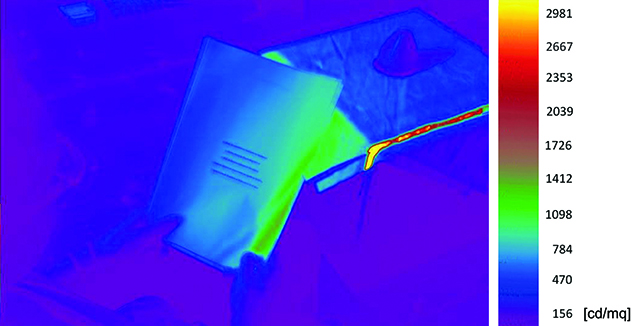 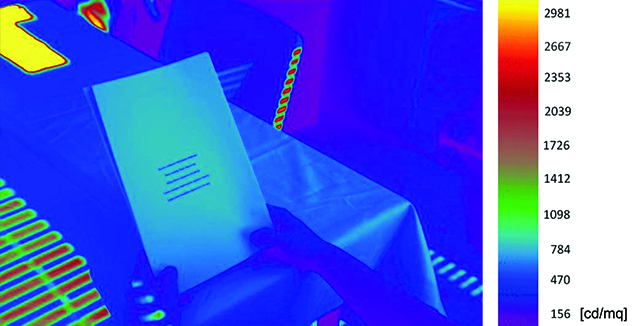 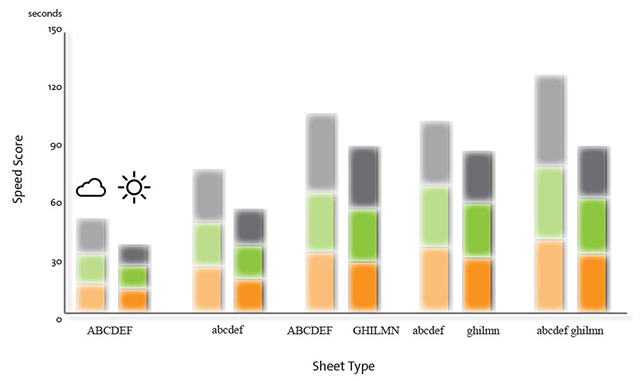 Time taken to carry out the task by the three categories of visual impairments. Results confirm that clear sky conditions (more opaque columns) is better compared to an overcast sky condition, based on performing the task and the accuracy (see accuracy score) especially for the pathology of macular degeneration. Cataract and visually unimpaired people results are almost similar in each type of sheet. 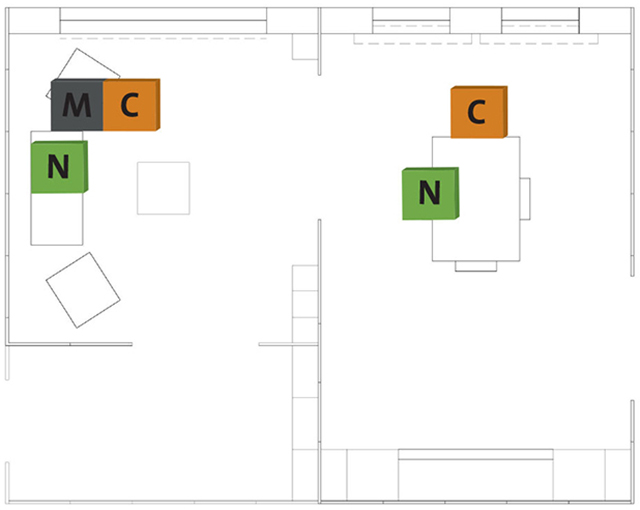 The preferred daylighting system was the thin linen curtains in the Living Room. All subjects were affected by M and rated the first solution as the best, while subjects with cataract or visually unimpaired, the two solution were rated equal.

The study helps in understanding how elderly and visually impaired people manage natural lighting distribution in their indoor environments, especially in living spaces such as Lounges and Kitchens, where most of daily home tasks are carried out.

Daylight is an excellent light source for interior spaces that is appreciated by people; natural light should be maximized in spaces of circulation and task areas, particularly in Kitchens and Lounges. Occupants should be able to control the amount of sunlight through the use of blinds in order to reduce glare and specular reflections on the visual task plane. Daylight devices able to produce diffuse light, like Linen Blinds, was preferred than both, venetian blinds and light shelves which produce disturbing light patches on the visual task plane and annoying reflections from the ceiling. The light patches were particularly annoying for impaired people with macular degeneration.

Benefits of daylight, creating often high level of illumination with even distribution on visual tasks,  can be noticed especially in subjects with more serious visual impairments. The “lighting design” is one of the architect’s most useful and potent tools to create indoor environment adequate for this group of people.