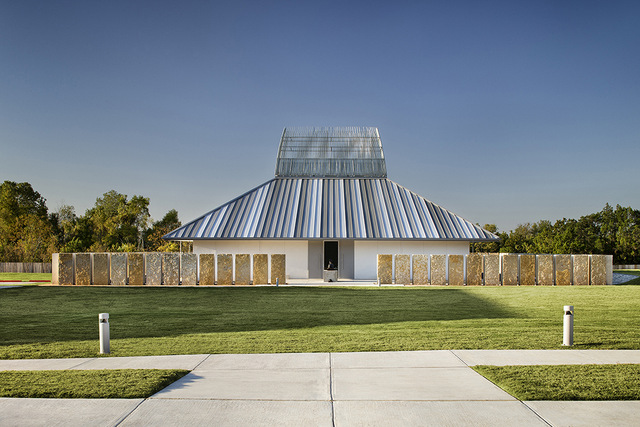 Established as a home for the Central Texas division of Chinmaya Mission, an international non-profit Hindu spiritual organization, this new 8-acre campus is characterized by an architectural language that reinterprets traditional Indian typologies in order to reflect the organization’s modern context while calling to mind the universal principles of a global community. Presented with the unique opportunity of designing a Hindu mission in Central Texas, the architects applied their knowledge of local building materials to create a visual language that is rich in texture, sculptural in quality, and innovative in design.

Founded in 1953, Chinmaya Mission Worldwide emphasizes the inner transformation of individuals through knowledge, spiritual practices, and community service. Chinmaya operates over 300 mission centers in 25 countries, including medical facilities, charities, and more than 80 schools and institutes of higher learning. Chinmaya Mission Austin was founded in 1988 with 15 families meeting in private homes; the Austin mission grew exponentially over time, with facilities divided up among a series of rented venues. Rapidly outgrowing such stopgap measures, Chinmaya decided to put down permanent roots via a purpose-built, centralized campus.

The main challenge of the project was two-fold: to create spaces that accommodated both the spiritual and practical needs of the rapidly-growing mission, and to apply established Hindu imagery, customs, and building practices in ways that felt new and unexpected. The campus master plan combines the traditional vastu shastra principles of Hindu design—emphasizing geometric patterns, symmetry, and directional alignments—with a contemporary sensibility. The completed first phase consists of a 4,185 sq ft temple and a 10,460 sq ft Bala Vihar (educational building) arranged around a central lawn, with space reserved for future buildings including an auditorium, priest’s quarters, and additional educational facilities.

Working within the restrictive budget of a non-profit organization, design was not sacrificed; rather, it inspired the design team to find a vocabulary that was simple yet refined. In elevation, white stucco walls and pitched roofs recall traditional Indian typologies; large windows provide abundant natural light in every occupied space; and deep overhangs offer refuge from the hot Texas sun. By simply alternating the tones of the standing seam metal roof panels, a striking design motif was conjured up from a commonplace material. The most spectacular example of this creative adaptability is the airy steeple atop the temple’s peak. To reduce costly field-welding, the delicate structure was shop-fabricated using galvanized fencing material and then lifted into place, where its verticality alludes to the mission’s lofty spiritual aspirations. Less prominent touches are the rain chains that ring each building, both distributing water from the gutters and acting as water features that reinforce a meditative quality.

Serving as the educational hub of the mission center, the Bala Vihar embodies the externalized celebration of collective spirituality, hosting 12 classrooms plus a central gallery and large covered patio for congregation and social events. Flexibility was a major priority, as the facility must comfortably accommodate small weekly classes as well as special events. In response, three of the classrooms utilize operable partitions to create larger spaces as needed. In addition, the central gallery plays multiple roles as circulation, display space, and assembly hall. The gallery’s lively palette of warm oranges and earthy blues draws on vastu tradition to create a softening contrast to the austere exterior. In traditional Hindu fashion, classes are held with students seated in circles on the floor, which required small considerations such as providing extra carpet padding and mounting wall fixtures low to the ground.

At the temple, the prevalence of symmetry and geometry are reminders of traditional Hindu religious architecture, which values visual balance in physical space and, consequently, in one’s inner spirit. Beginning in the central meditation hall and moving out toward the perimeter of locally-sourced limestone blocks, a series of concentric circles, squares, and rectangles—including an illuminated pattern in the meditation hall’s dramatically-sloped ceiling—references traditional mandalas and mandala-inspired architecture. Clean, angular lines define the exterior and interior spaces, while the perimeter of rough-cut stones obscures the view beyond when worshippers are seated inside the temple, focusing their attention back inward and encouraging meditation and introspection. Above the shrine, the most sacred space in the temple, light from concealed skylights is reflected by a golden wall, creating an aura around three deities arrayed with bright robes and flowers. Two more examples of the resourceful use of ordinary materials may be found in the courtyard, where contrasting gravel colors define pathways used for meditation and ceremonial purposes; and in the meditation hall, which makes use of a series of stripes in the carpet to form aisles that assist in spatial organization during services.

In its development and execution, the design of Chinmaya Mission Austin strikes a delicate balance between the need to respect both the traditional building methods of an ancient religion and the limited resources of a non-profit organization; and the desire to employ a contemporary aesthetic that reflects the forward-thinking approach of an international faith. 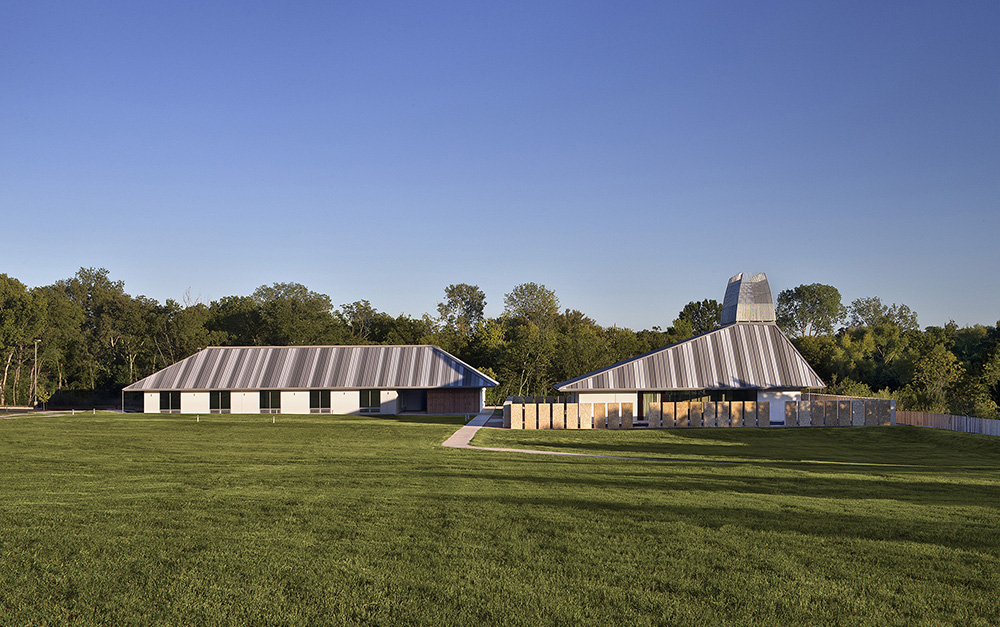